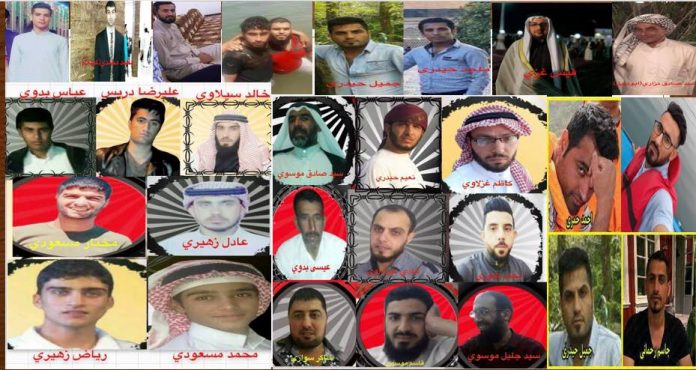 According to the statement of Farhad Afsharnia the General Director of the Justice in Khuzestan (part of Al-Ahwaz) that was broadcast by Iranian state-run media (ISNA.IR) that large number of Ahwazi political and cultural activists are awaiting for their death sentence issuance.

The statement that was published on Monday the 24thJune 2019, Afsharnia said that five person of the military parade attackers has passed away on the same day ( 22ndof September 2018), and other large number of Ahwazi prisoners who has activity or interference or involvements with (attackers) will be executed with no mercy.

Despite passing nearly nine months from the incident, no Ahwazi organisations has accept the responsibility and the Iranian intelligence service has arrested hundreds of Ahwazi political, cultural and civilian activists, including families with all its members.

Many of Ahwazi prisoners were severely tortured in detention centres. Some of them their legs have been pierced with a drill, some their nail been pulled, some their hand been broken twice and some other threatened with sexual assault to get false confessions from Ahwazi prisoners.

In addition number of Ahwazi detainees, some of whom were arrested several months before the military attack, were acknowledge by the Iranian Revolutionary Court in Ahwaz capital as a “Baghi” in a few weeks ago. The “Baghi” mean in accordance to articles 287 and 288 of the Islamic Penal Code, those were holding gun or were acting against Iranian national security will be sentence to death directly.

The following are Ahwazi prisoners names who were sentenced with “baghi”:

1- Ms. Sahbaa (Lamia) Hamadi, 21, son of Zaidan, married, had two children and residents of Al-Khafajiya (Susangerd) city, a writer and social network user, had been arrested in October 2018.

2- Seyyed Morteza Mousavi, son of Yousef, a student of English literature and residents of Al-Khafajiya (Susangerd) city who were arrested on June-July 2018.

5- Abdullah Shamusi and resident of Mallashyeh district of Ahwaz capital.

7- Abdulnabi Shamusi and his three cousins all resident of Mallashyeh district of Ahwaz capital.

10- Ali Haidari son of Shayea  and resident of Mallashyeh district of Ahwaz capital.

11- Ahmad Hemri, 29, and resident of Mandali district of Ahwaz capital.

12- Abdullah Maramazi, son of Jawad, residents of Al-Khafajiya (Susangerd) city who were arrested in June-July 2018.

In contact from Ahwazi Centre for Human Rights with a family of detained prisoner, the family added that “ during the arrest that taken place against our son, he had nothing to do with Iranian national security and our son he does not know the police station. Our son was looking after us and we are very concern about his fate. In contact from detainee with family, the detainee told the family that the Iranian prison incharge has sent two men under title of “Physiologist”, where these two men were monitoring the detainees behaviours directly and indirectly, and they will send their report to Iranian intelligence service. “

The 4-year-old baby died after fallen into an unprotected canal in...