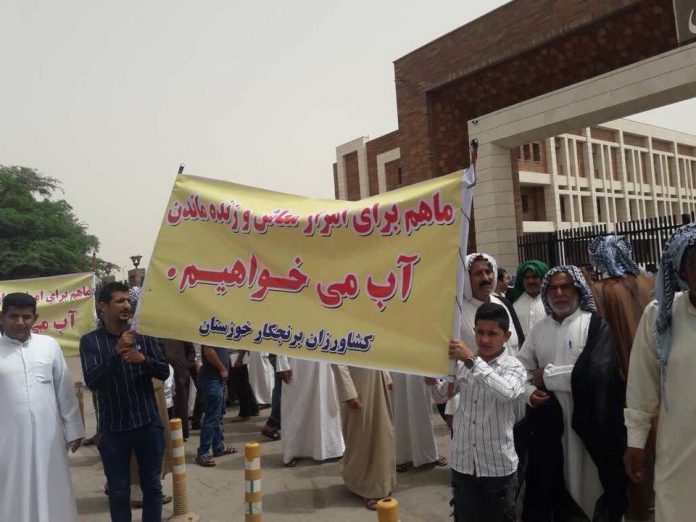 A group of Ahwazi rice farmers in the Howeyzeh city, by representing other farmers in the city, has been rallied in front of the provincial governorate building in protest of the lack of water due to the drying of the Karkheh River on Tuesday the 18thof June 2019.

One of the farmers present at the gathering told the media correspondent that the farmers of the Howeyzeh city, like other Ahwazi cities, have been cultivating the rice; and as the product needs plenty of water, but it is nearly to a few days that the Karkheh river dried up and it is impossible to irrigation our lands.

The Ahwazi farmer continued and stated that there is no ban on rice cultivation for this summer was announced by Khuzestan (part of Al-Ahwaz) governor Shariati. The farmer said that the villages of Qayrsariya Olaya, Northern Atabey, southern Atabey and part of the Howeyzeh city are located alongside of the Karkheh river, and by drying this river, a huge loss will hit the farmers of this region.

“The residents of Howeyzeh city’s livelihood based on farming and more than 100 hectares of farming was done on the Karkheh river’s margin,” The farmer added.

The farmers are demanding the authorities to open the water behind the dams to flow in the river before the destruction of the hundreds of hectares of the cultivated rice in Howeyzeh city.