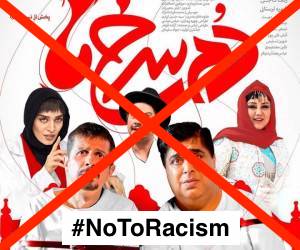 According to the rules of screening for the film, they believe that the film “Red Tail” contains insults, ridicule and racial hatred towards the Arab people in Ahwaz region and Iran.

Like all other scenarios, this film “Red Tail” is an example of insulting the Ahwazi Arabs. We strongly condemned and inviting all non-Persian nations to fight solidly against this racist act.

We as the non-Persian nations under occupation of Iranian-Persian racist regime, condemn systematic assaults and insults on our peoples. We, Arabs of Al Ahwaz, Turks, South Azerbaijan, Kurds, Baluch of Western Baluchistan, Turkmens of South Turkmenistan, and other non-Persian people under Iranian occupation, want to express our strong solidarity and unity in the face of the brutal dictator regime of mullas.

Many Ahwazi Arabs Got Arrested but Anti Regime Protests Continues

The story of Al Ahwaz