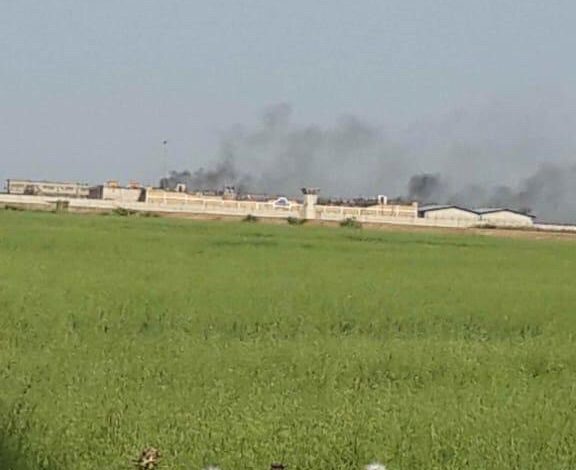 Following serial uprisings in Iranian prisons, inmates of Sepidar prison in Ahwaz prison riot on Monday, March 1, and have been in custody for some time, some reported sound of gunshots were coming from inside of prisons in the Ahwaz Central Prison in Karun Prison, Sheyban prison.

According to local observers, the protests are due to prison officials’ failure to grant prisoners leave because of the fear of Covid19.

In some films, the sound of humming and screaming is heard from inside the prison with the sound of gunfire, while at the same time the flame of the prison building gradually grows larger.

In the videos posted on social media about the riot in Sepidar prison in Ahwaz, one can clearly see that part of the prison building is on fire.

Commander of Khuzestan Province Police Commander, Heidar Abbaszadeh, in an interview with the official news agency (IRNA) confirmed the uprising in Sepidar Prison two in Ahwaz, confirming the fire and suppressing the protesters, saying: “Peaceful presence of security forces at Sepidar Prison Completely prevails in all sections of this prison, and anyone who has been the cause of the unrest in this prison will certainly be dealt with legally. A number of inmates burned several trash cans inside the prison, which also restricted security and law enforcement officials in the prison. ”

The sources continued: Some prisoners were killed and others suffocated as a result of clashes between the two sides and burning parts of the prison.
These sources quoted eyewitnesses as they heard gunshots in the prison.
According to them, the roads leading to the prison were closed last night in the presence of security forces and snipers.
Siege of Sheyban prison by the Revolutionary Guards
Prisoners at Sheyban Prison protested to prisoners because of lack of health facilities, outbreaks of Covid19 pandemic, but were confronted by security forces shooting and firing tear gas.

Social media activists reported that the prison is currently under siege by the IRGC.

A family member of one of the inmates of Sheyban prison in Ahwaz said: “I was on the phone talking to my father when I heard the gunfire. He told me: Tear gas was fired at us. At that time I didn’t hear my father’s voice and someone next to him said to his friend, ‘Get him sick.’

The source says: I don’t know if my father was injured or his tear gas was fired at him.

Meanwhile, human rights activists report the deaths of some prisoners at Sepidar Prison and call for the Iranian government to respect prisoners’ rights.

The issue of escaping prisoners has not yet been determined for our sources, but there was severe repression by security forces and several were killed and wounded.

Condemned by the crackdown on prisoners, the human rights activist demanded that the Iranian government be required by international institutions to respect the rights of prisoners

We, the Ahwazi Centre for Human Rights (ACHR), concerns, about the situation in Ahwaz regarding the Coronavirus. Iranian regime must work night and day with UN health agencies seeking help to prevent global coronavirus crisis.

Hossein Bouazar is a human rights activist from the Ahwaz region in Iran. He writes about human rights abuses committed on the Arab Ahwazi.
Ahwazi Centre for Human Rights
Date: 31/03/2020

Leaked Letter – Orders to prevent any rallies and demonstrations in...