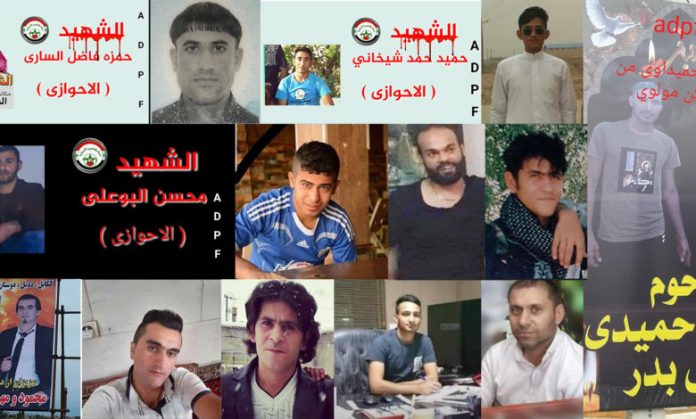 Sepideh Qolian, a student and labor rights activist who was arrested following reports of torture and ill-treatment during her detention following the Ahwazi workers’ protests in 2019, has continued her revelations of her observations in prison with a series of tweets that gave an accurate and at the same time bitter picture of the experience of captivity.

She has shared 19 narratives in the form of a book entitled “Tilapia Kills the Blood of Hur al-Azim” and in many of these narratives, the names of Arab male and female prisoners are mentioned who are forced to confess against themselves under pressure and torture. According to her, Ahwazi prisoners were not allowed to speak Arabic, were called “najis” (ritually unclean), and were forced to speak Persian while being threatened with death. Regarding the forced confessions, she wrote: “I have witnessed the barbaric torture of Ahwazi prisoners who have repeatedly been placed in front of the camera to confess against themselves”.

In one of these tweets, she mentioned an Ahwazi prisoner named Ismail who, under the baton and cables blows of his interrogators and in response to those who asked him the name of the operation, replied in Arabic that he did not know, which led to more torture and the torturers said to him, “najis, Speak Persian”.

Sepideh Qolian wrote on her Twitter page: “It is the blows of the baton and the cable that hit his body one after the other along with obscenities, oh mum! This is the second information I hear from the sound of torture and screams. “The torturers ask him the name of the operation and he shouts in Arabic, I don’t know. The torture is getting worse and worse and the torturers are shouting: “najis, Speak Persian”.

She also described the continued interrogation of Ismail as pouring hot substances and possibly boiling water on the body of the Arab prisoner to force him to confess. Sepideh Qalyan wrote, “It was as if boiling water had been poured on the body of Ismail Arab, who did not know how to speak Persian properly. Tell me the operation name and I sign but I only believe in God”.

Another narrative of this labor activist tells of the oppression and torture that a 20-year-old man named Hassan was beaten for going to a wedding in Arabic clothes. She also writes that her narratives are only for fighting silence against oppression and do not pursue any other goal. “These are my experiences from my 90 days in the Ahwaz Intelligence Detention Center. I am a Lur, I am not an Arab, I do not intend to divide, I am just a witness, a witness who is not going to remain silent,” she said.

The labor activist, who has been arrested and imprisoned many times, also announced the presence of hundreds of Arab women prisoners in Ahwaz prisons that they were imprisoned only because of “being a woman” and “being an Arab”. “Zahra is one of the hundreds of Arab women detained, tortured, and oppressed in Ahwaz for two reasons, first being a woman and second being an Arab” Sepideh said.

Women’s rights activists mentioned another married Arab woman who had been brutally tortured and electrocuted to force her to confess. She wrote: “Sahba Hamadi, born in 1990, has been in detention since August 2019. She is married and she is a student of agricultural engineering. I saw her for the first time in the Ahwaz Intelligence Detention Center. She was electrocuted in the interrogation room to admit that she intended to poison the “Arbaeen pilgrims”.

These narratives of torture and ill-treatment not only clearly show that Arab prisoners and detainees are brutally and systematically tortured to make forced confessions in front of the camera against themself, but also the identity, clothing, and language of an Arab citizen is being insulted. An Arab citizen is not only considered a second- or third-class-level citizen but is also more oppressed by the Iranian occupation regime due to his/her different language, geographical location, history, and resources of his/her land. These confessions and narratives of the torture of Arab women and men prisoners are important because these narratives themselves are revealed by a non-Arab person who has a history of struggle and the defense of workers’ rights and credit, and these observations are objective. They are shared without intermediaries for us.