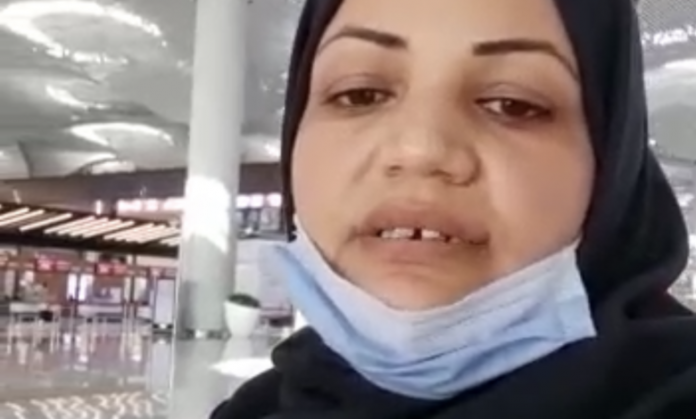 In a recorded video over the “Instagram” application, an Ahwazi refugee revealed that the Turkish authorities prevented her from leaving Istanbul Airport, despite the fact that Turkish security had previously asked her to leave the country.

In the details, Ahwazi Centre for Human Rights (ACHR) obtained the video clip, in which Hamida Sari says that the Turkish authorities have prevented her and her son (Amjad) from traveling to Armenia via Doha despite the fact that the Turkish security asked her a few weeks ago to leave the country within 20 days, otherwise she will be handed over to Iran.

An informed source also revealed to ACHR that the Turkish security authorities had arrested Mrs. Hamida along with her son at Istanbul International Airport.

The Ahwazi refugee, Hamida Sari son of Saeed, born in 1980, is active in the field of the Arab Ahwazi civil and cultural rights and left Iran in April 2018 with her son Amjad, born in 2004, and she escaped from the hell of Iranian prisons in the hope of gaining freedom, according to reliable source confirmed to ACHR.

The ACHR calls upon Turkish Immigration and foreign authorities to not deport the Ahwazi refugee woman along with her son, as handing over the Ahwazi refugee will raise the risk of being arrested and tortured by Iranian intelligence service and strongly recommend the Turkish authority to review their decision as it related to Ahwazi woman and her son’s life.