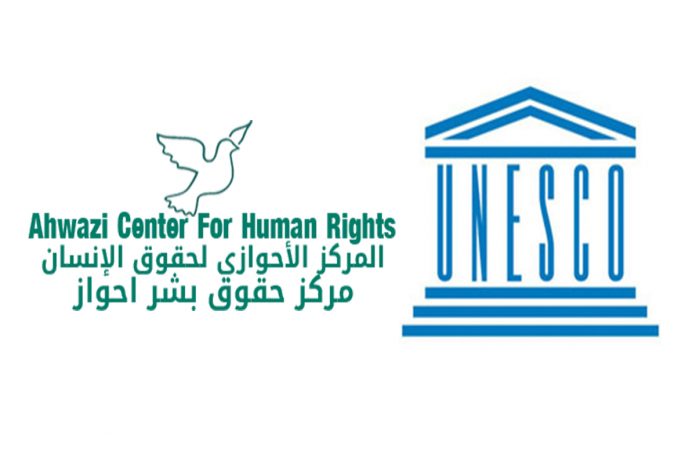 The Ahwazi Centre for Human Rights has sent a letter to the UNESCO regarding to the recent Persian language test conducted by Iranian department of Education that is as follows:

the Director-General of UNESCO

Iranian consecutive governments have brought large-scale devastating social, Educational and economic consequences for the Ahwazi Arab people that are residing in South and Southwest of Iran. The never-ending grievances—disenfranchisement, poverty, incarceration and recently added school Persian language test against Ahwazi people is down to the fact the occupying regime still confident that no international body is going to take effective actions against it for its crimes and ongoing human rights violations in Al-Ahwaz and other regions in the country. This caused more pain and despair for Ahwazis who are struggling for their national rights.

The education system for Ahwazis is similarly dire and neglected, in marked contrast to that available to Persians, with Ahwazis even forbidden from being educated in their own language, Arabic. Ahwazi educators and activists found to be teaching in Arabic are subject to imprisonment, torture and often execution on fabricated charges such as being overseas stooges who aim at destabilizing the national security of the country.

Since Iran is multi-Nations country and it consists of Ahwazi Arab, South Azerbaijani Turk, Baluch, Turkmen, Kurd, and the mentioned nations are made more than %70 of  Iranian population, the formal language spoken in Iran is Persian and non-Persian nations are deprived from studying in their own language.

The Deputy Minister of Primary Education in Iran Mrs. “Rezvan Hakimzadeh”, announced on Wednesday, May 29, 2019, the addition of a “Persian Language Proficiency Test” to the children school assessment plan.

According to the racist plan, children who attend pre-school assessment test, if they do not have the ability to “speak Persian” will not be approved and will be prevented from enrolling in Iranian educational system.

The discriminatory plan aims to obliterating the non-Persian nations and creating a unique Persian entity based on Persian culture and traditions, led to the marginalization of non-Persian languages despite the Iranian constitution recognizing the right of nationalities to learn in their mother tongue according to the Article 15 of the Constitution of the Islamic Republic.

Iranian extremist have already called for the burning and obliterating of non-Persian nationalities and races or their expulsion from Iran.

“Families living in Iran who do not teach their children Persian before entering school or prevent them from doing so, do not have the authority to keep children and for the sake of the survival of the Iran‘s children, these children must be robbed from their parents,” wrote Mohammad Baqer Tabatabaii, a controversial Persian character on his Twitter page.

Another person known as Dr. Ayhan Fikret wrote on Twitter that “the Iranian race is not black or brown, and it is white and for the sake of reforming the Iranian race, we have to kill 5 million Arabs, Mongols, Afghans and Iraqis”.

At the same time that Iranian regime is wasting the resources and wealth of its people to its regional adventures and to spread chaos and terrorism in the region, the non-Persian regions suffer from a noticeable scarcity of educational resources and cadres. For example, in the Al-Ahwaz region (includes Khuzestan, Bushehr, Hormozgan and south Ilam provinces in Iranian map) inhabited by the Arab children that are still studying in metal rooms due to the lack of regular schools and many children are forced to move between the villages and this presents them with many problems, including traffic accidents.

According to Mr. Gholamreza Shariati, governor of Khuzestan (part of Al-Ahwaz) province, there are more than half a million illiterates in the province and 238,000 of them are between the age of 10 and 49.

If Iran wants to support the education system of the non-Persians people, the best solution is to allow the study in the mother tongue and not to suppress the people at the expense of another language.

The right to learn in the mother tongue is a human and guaranteed right in all international covenants and to prevent a group of people from speaking their mother tongue, exposing them and exposing their culture and history to extinction. This seems to be what Tehran wants.

Ahwazi Civil Activists Protests Another Insults by the Iranian Regime