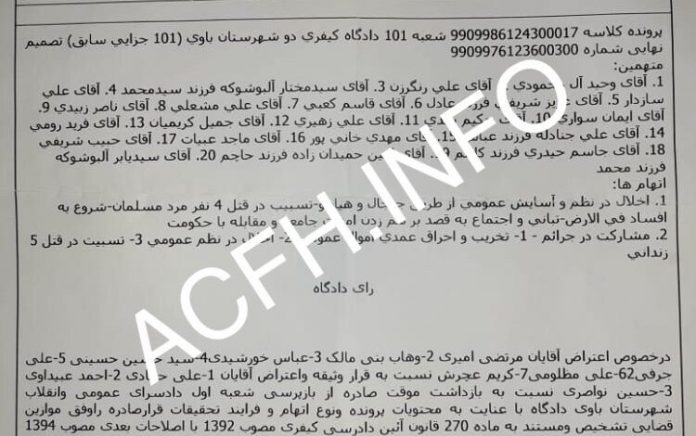 The Ahwazi Centre for Human Rights (ACHR) has received a document from its reliable sources within Al-Ahwaz about heavy charges been ruled against dozens of Ahwazi prisoners that were protesting on 30-31 of March 2020.

According to the document the protesting prisoners are accused with the charges in the litigation number 9909976123600300 issued by Branch 101 of the Criminal Court of Bawi County, presided over by Judge “Mansour Moatamedzadeh”, are as follows:

First- Disrupting the public order and tranquillity through controversy and fuss – Causing the murder of 4 Muslim men,

Second- Participation in the following crimes:

A) Deliberate destruction and burning of public property

B) Disruption of public order

C) causing the murder of 5 prisoners.

The prisoners charged with the above charges are as follows:

the First Branch of the Bawi Court rejected the objection of prisoners against their heavy financial bail. The prisoners’ names are as follows:

Similarly, the First Branch of the Bawi Court rejected the objection of prisoners against their disastrous temporary detentions. The prisoners’ names are as follows:

So far the Iranian criminal regime did not confess about prisoners’ death during protest taken place on 31st of March 2020 while Ahwazi activist has documented more than ten dead and dozens of injuries among Ahwazi prisoners.