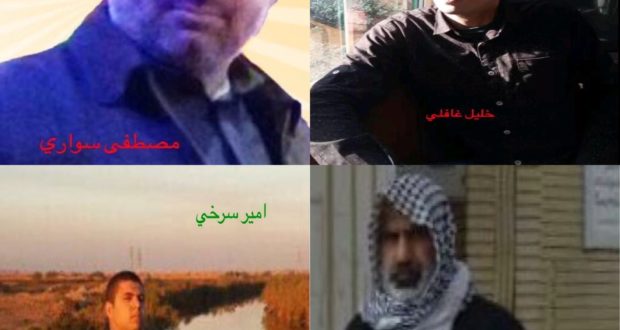 The Iranian security forces raided several safe houses in the city of Toster (Shushtar) and detained a group of cultural activists on Tuesday, April 25, 2017.
A source quoted to Ahwazi Centre for Human Rights (ACHR), that the Iranian security forces at dawn of Tuesday, specifically at five in the morning, raided the Ahwazi Arab citizen property and tampered their homes and arrested mass Ahwazi youth and took them to an unknown destination blindfolded.
ACHR has identified following names who were arrested in the city of Toster:
Jomeaa Sawari son of Ramadan with age 35, married and has two girls,
Saeed Sawari, son of Jasem, married with age of 30,
Karim ben Najaf with age of 26,
Saheb Kaabi,
Rasool Sawari, son of Mohsen, married with age of 33,
Abdolkarim Kaabi son of Rokath,
Bashir Sari son of Sahi,
Ahmed Cheldawi,
Hassan Kaabi,
Ali Kaabi,
Toeameh Farajalah Kaabi,
Mejbel Farajalah Kaabi,
Abdolhoseein Farajalah Kaabi.

The attack came after days of similar arrests targeting a number of Ahwazi citizens in the town of Al-Qouriya. The 26-year-old Hussein Kaabi son of Kazem, 22-year-old Mohammed Kaabi and 23-year-old Mohammed Kaabi son of Rahim.
The Iranian intelligence service has arrested two activists of the “Tafkir” district south of the city of Toster, on the charges of promoting ideas against the Iranian regime through social networking sites on the Internet on Tuesday the 11th of April 2017.
Sources quoted to ACHR that the Iranian Intelligence arrested two Ahwazi young men named as Massoud Jalil Shehit and Sami Khalaf after raiding their homes in a brutal way that terrified the children and women, as well as confiscated their mobile phones.
The sources added that the families of the detainees did not know until now the place of detention of their children. After chasing up the detainees’s case in the intelligence headquarters in Toster, intelligence officers there told detainees’ families that their sons were accused of promoting ideas against the Persian state via the Internet.

In similar context the Iranian intelligence arrested two Ahwazi activists during raids in different districts west of Ahwaz capital on Wednesday the April 26 2017, and took them to an unknown location.
The sources stated that the Iranian intelligence service forces raided a house in the “Althoura” district in the west of Ahwaz capital on the evening of 26 April and arrested an Ahwazi activist Mr. Ahmad Sari son of Nadem, with age of 26, and took him to an unknown location.
The sources added that force belonging to the Iranian intelligence service raided “Al-Aziziyah” district west of Ahwaz capital on the same day and arrested an activist named as Mohammed Amin Sari, with age of 27, and taken him to an unknown destination.
The sources pointed out that the detainees accused of advocacy of the Sunnis activity, where it is prohibited by the Persian regime and its security services.
The Iranian intelligence forces launched a large-scale arrest raid and arrest in different parts of Al-Ahwaz during and before the anniversary of the occupation day of Al-Ahwaz which they arrested a number of Ahwazi activists.
The sources expressed that large forces belonging to the Iranian intelligence service backed by police and Basij forces raided the “Althoura” district west of Ahwaz capital on Thursday evening, April 13 and arrested two Ahwazi activists named as Khalil Ghafli son of Hassan, with age of 37, and Mustafa Sari son of Majid, with age of 38, and took them to an unknown location.
The activist Khalil Ghafli had applied for asylum in the Netherlands in late 2015, but the tragic conditions experienced by refugees in the refugee camps and slow action by the Dutch Ministry of Immigration forced Ghafali and dozens of other Ahwazi refugees to return to Ahwaz. Since his return to Ahwaz, activist Khalil Ghafli has suffered from the intelligence pressure through summoning him several times to investigate and prevent him from traveling abroad.
In a related context, sources believed that large forces belonging to the intelligence service backed by the Basij militia raided on night of Friday, April 14 the “Althoura” district and arrested six Ahwazi citizens and taken to an unknown location:
ACHR identified following names:
Hamzeh Cheldawi son of Abbas with age of 24,
Abdolnaser Abiat son of Abod with age of 38,
Sadegh Haidari son of Lafteh with age of 34,
Hashem Haidari with age 35,
Jaafar Haidari son of Sadegh with age of 19,
Khaled Shakhi son of Saeed with age of 19.
During the arrest, detainee’s personal belongings, including books, computers and mobile phones have been seized by security forces.
In the same context, a large number of security forces and the Revolutionary Guard raided the Malashiya neighbourhood west of Ahwaz capital, on Friday evening, April 14, and arrested an Ahwazi young Khalid Jayyan (Sharifi), 25 years old, and took him to an unknown location. The sources of ACHR said that the Iranian forces conducted patrols in Ahwaz capital neighbourhoods in anticipation of the outbreak of a demonstration denouncing the occupation of Al-Ahwaz.
The Iranian authorities summoned dozens of Ahwazi activists, including a number of former prisoners and Ahwazi martyrs’ relative to attend their security centres in Ahwaz capital on Friday, April 14 2017and forced them to sign a written pledge to stay in their homes in the coming days.
The sources confirmed that dozens of Ahwazi activists were summoned to attend a security centre in the security zone west of Al-Ahwaz capital, while the security forces summoned them to sign a written pledge to stay in their homes from 15 to 20 April 2017 especially during night time.
The Iranian intelligence service threatened activists who were summoned to arrest and imprisonment if they did not comply with their written promises that signed under pressure and terrorism. ACHR received the names of a number of Ahwazi youth from “Althoura” and Malashiya neighbourhoods west of Al-Ahwaz Capital who were summoned to attend the Intelligence Centre and they are as follows:
Jacoub Tamimi with age of 50,
Shaker Tamimi with age of 37,
Toufigh Tamimi with age of 35,
Jasem Batrani with age of 52,
Mohammed Batrani son of Jasem with age of 28 (previously been arrested)
Basem Batrani son of Jasem with age of 26 (previously been arrested),
Riyath Batrani son of Jasem with age of 20 (previously been arrested),
Yousef Thaalabi son of Sabah with age of 21,
Najem Cheldawi son of Karim with age of 30 (previously been arrested),
Mustafa Sari son of Rahim with age of 18,
Emad Haidari son of Ehial (previously been arrested),
Abdullah Cheldawi son of Farhoud (previously been arrested).
It is worth mentioning that the Iranian authority’s forces always summon Ahwazi former prisoners, martyrs’ families and other activists before every Ahwazi national occasion to pressure them in order to prevent them from participating in these events.
Ahwazi sources have reported that one of the four Ahwazi Arab convicted activists, Rahim Sharhani, 41, has been sentenced to a year of imprisonment in Iranian prison. All four detainees been informed about their court’s outcomes on the last week of April 2017.
Another of the four, Salman Sorkhi, 24, was sentenced to six months in prison. The other two activists, Ali Peiravi Nejad and Adnan Bayanat Bani-Sekini have been fined ten million Iranian Rials (equal to £250), because they promoted a benign internet hashtag calling for Ahwazi people to clean their neighbourhood street in preparation for the Eid-El-Fitr holiday that runs each year after the Muslim holy month of Ramadan.
All four of these victims of the Iran regime have reportedly spent more than a month in solitary confinement in the detention centre of the Ministry of Intelligence since July 2016. They were arrested in the Farhani neighbourhood while volunteering for street cleaning. During their detention, they have been subjected to severe torture and ill-treatment.
Ahwazi Centre for Human Rights

Maher Kaabi is on a hunger strike to protest against his...