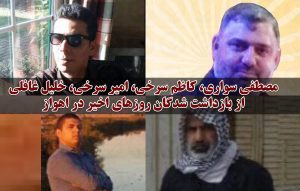 Ahwazi activists told our sources, Iranian intelligence security forces raided several places in Ahwaz city and they arrested a number of Ahwazi activists on the eve of protest which occurs every year at this time (15th of April).

The biggest Demonstration was on the 15th of April 2005 after the publication of the letter attributed to Mohammad-Ali Abtahi the then Vice President of Iran, to change the population of Ahwaz (Ahwazi Arabs), ethnic cleansing and the force migration of Arabs in Ahwaz.

Ahwazi activists added on Friday 14th of April Iranian intelligence security forces captured 5 activists named; Hamzeh Cheldawi 24, Abdul-Nasser Ebeat 38, Hashem Heydari 35, Sadegh Heydari 34 and Jafar Heydari 19 years old. They are from Hay Al-Thora. Their families are very concern as they have no clue where the Iranian intelligence security forces have taken their loved ones.

According to our sources, The Army of the Guardians of the Islamic Revolution (Also Known As “Sepāh-e Pāsdārān-e Enqelāb-e Eslāmi”) captured and took Khaled Chaeean (Sharifi) to an unknown location. Khaled is 25 years old. His family are very concerned as they have no news of their son.

Our sources added, on Thursday two cultural activists named Khalil Ghafely 37 and Mustafa Sawari 38 years old were captured by the Ministry of Intelligence of the Islamic Republic of Iran (also known as Vezarat-e Ettela’at Jomhuri-ye Eslami-ye Iran) and taken to an unknown location. The security forces also took all of their belongings such as their books, Computers and mobile phones. Their families haven’t heard anything from them. 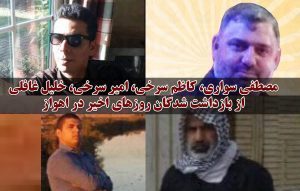 Ahwazi Civil Activists Protests Another Insults by the Iranian Regime

Another Ahwazian is Dead for no reason

Maher Kaabi is on a hunger strike to protest against his...

The Abtahi letter, leaked to the international media in 2005