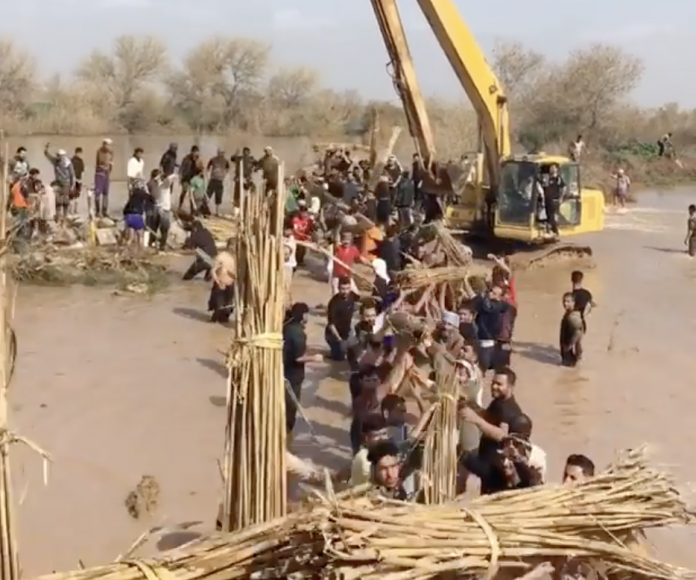 Iranian regime’s new techniques for forced migration Ahwazi Citizens with a man-made flood derived from opening one of many Dams in Ahwaz, Dez Dam.

From killing Ahwazi Activists to publicly announcing that they hate Arabs (in different platforms) to Iranian regime’s deliberate attempt to Forced Migrate the Ahwazi citizens  from Ahwaz to other region, has been a plan since this regime’s early days.

So, this time Iranian regime decided to destroy Ahwaz and Ahwazi people with a man-made flood which destroyed thousands of farms and houses of Ahwazi citizens. The Iranian regime told the Indigenous Ahwazi Arab farmers to leave their home land to seek safety elsewhere.

How is it possible to have flood in Ahwaz whilst have water shortage in Ahwaz?

Well to here is a list of Ahwaz water transfer tunnels that causing the water shortage in Ahwaz;

Tunnel water transfer projects, that is to be diverted to the desert provinces include:

One of the largest water transfer projects in the Middle East, which is from the Dez river in Aligudarz, and according to experts, is the best water in the world. This project is used for providing water for drinking, agricultural and industrial purposes, that feed 10 towns and 30 villages, including (Qom, Saveh, Salafchegan, Golpayegan, Khomein, Mahallat, Nim Rud).

Water diverted from Dez dam for Arak Industrial use)

This project is one of the major projects for the transfer of more than one billion cubic meters’ water for the supply of agricultural and industrial water in the provinces of Kerman, Isfahan and Yazd.

Water transfers by this tunnel is mainly uses for Zayandehrud river in Isfahan.

Water transfers by this tunnel is mainly uses for Zayandehrud river in Isfahan.

Worth noting that Farmers were fined by the government for farming in their own land.

The situation is so bad in Ahwaz that in 2018 Ahwaz’s dust level reached 120 times the safety limit set by the WHO (World Health Organization), all thanks to Government Mismanagement which led to Rivers and Wetlands Drying up from the above reasons.

Whilst we have man-made water shortage in Ahwaz, now we have a man-made flood in Ahwaz

The Ahwazi Centre for Human Rights reiterates the need for the international community to hold Iranian government accountable for their actions.

We, Ahwazi Centre for Human Rights are calling on all human rights organizations, including Amnesty International and the European Parliament to address the situation of Ahwazi Arabs and put an end to human rights violations towards Ahwazis.

Ahwazians and other minorities will not benefit from voting in Iranian...

Wassal TV’s report on the assassination of Ahmad Mola

Nikki Haley: The Islamic Republic of Iran was born into a breach...